testimony of a life as an artist 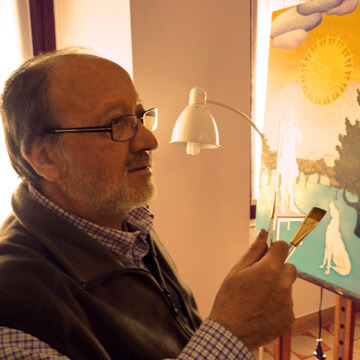 Painting, sculpture and writing are magic as well as light and images that it forms.

The ancient priests knew it very well and they blew and rubbed color into animal shapes on the rock in the deep tunnels of the earth.

The soul of the animals was captured and remained common wealth forever.

It was the concept of the eternal.

What is impossible becomes real, it becomes the charm in the light that in all shapes.

The painting, untill the 40s, had a linear path, increasing its perfection: social, religious, poetic, philosophical and historical.

It is as if the man had decided that the magic of the image, along with the sound and the written word, could create a thin diaphragm that gives beauty to beings upset by fear in front of an infinite space or the perception of God.

All this suddenly was sliced cleanly by historical events. The path of the arts, Ariadne's thread that makes the invisible visible and reduces the fear of the unknown, it's like it was cut with no possibility of return.

Technical expertise, acquired over time, had disappeared, images replaced by forms useful in dark speeches, devoid of purpose and poetry.

Mostly we try to beautify the city with architectural taste, making decoration.

The new decorators are grouped to be strong and arrogance is at extreme levels.

When I started painting I basically found a whole and the media information would come later - I saw the first museum exhibition when I was eighteen, during a school trip, in the Royal Palace of Naples - so clear I had to start with very few resources and rare iconographic supports and try to reconnect a wire with a past, until then only warned.

There were no more masters: all were dead or pushed into a corner.

We had no references.

I did what a shy and secluded artist could afford in the spaces left by the teaching.

I set out to make this the main connotation to my painting: I said that painting I'll always remember to make it understandable to all, taking care to allow several layers of reading.

Let the man ran out of the specific means of the field of art as the rich man of knowledge can read and feel the energy of color or sign. I hope everyone can come to work to find in it the meaning that best adheres to his own being.